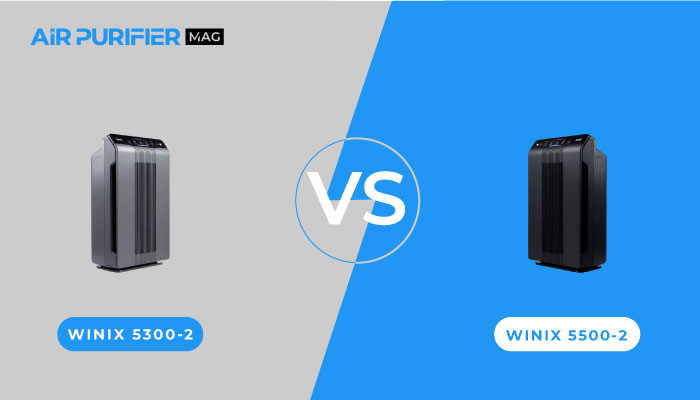 Winix air purifiers have made a name for themselves with their dependable performance, durability, and affordability. There are a ton of models from the manufacturer as Winix is known for updating its models regularly. Each new model brings innovation and builds on the success of its predecessor, making Winix one of the best air purifier brands out there.

This guide will compare Winix 5300-2 and 5500-2, so you can understand the differences between the two, allowing you to make the right decision. Also, it will help you understand the improvements these models bring over their predecessors.

Air purifiers are designed for the sole purpose of removing air pollutants, odors, dust mites, and other air irritants to ensure surrounding air is of high quality. According to researchers, air purifiers can help people with allergies, lung infections, or other diseases by filtering out the irritants.

The 5500-2 offers remote control, advanced Volatile Organic Compound (VOC) detection sensor, pre-filter, advanced odor control, and an added warranty over the 5300-2 Air Purifier. Both the 5300-2 and 5500-2 are updated versions of the outgoing 5300 and 5500, respectively. The detailed similarities and differences are explained below.

The products share a lot of common key features. These include:

This is where Winix has added some extras to the 5500-2, which help it stand out. The slightly higher price point is more than justified by the added features. The table below highlights the key differences between Winix 5300-2 and Winix 5500-2

According to studies, the formation of hydroxyls helps in removing air pollutants and Winix employs the same technology. It also helps in avoiding harmful ozone formation that can occur if oxygen ions react with other oxygen ions. This technique is highly effective and can combat tobacco smoke, cigarette smoke, household odors, pet odors, and even larger particles by destroying them at a molecular level.

The newer 5300-2 brings an improved air quality indicator light, a timer, auto mode, and features a quieter fan as compared to the outgoing Winix 5300. The changes add great functionality to the model and bring it on par with the competition.

Both models, the Winix 5300 and the 5300-2 can operate automatically when air quality is poor. They both feature a fan that can operate at four different speeds. Both models have sleep mode, so you need not worry about any disturbing noise while you are sleeping.

In addition, the discontinued Winix 5300 did not have a timer, and you had to personally set it for operation at a specific mode and time. The 5300-2 has a timer that allows for automatic operation. You can choose the timer to purify the air after every 1, 4, and 8 hours automatically.

Winix 5300-2 makes much less noise while purifying air than the older Winix 5300 air purifier. That, coupled with the automatic mode, can help improve sleep quality. All the improvements make Winix 5300-2 a worthy successor to Winix 5300.

The Winix 5500-2 is an upgraded version of Winix 5500. It brings a 4-stage filtration process, higher efficiency, greater control over fan speed, and an advanced activated carbon filter as compared to the outgoing Winix 5500. The improvements make the 5500-2 Winix Air Purifier a great option for home and office use.

Both the Winix 5500 and 5500-2 share a lot of features including multiple filters, adjustable fan speeds, filter replacement indicator, air quality indicator, sleep mode, and automatic timer control. Also, both the models have a similar filter replacement life on both the True HEPA filter and the carbon filter.

While it might seem that both the models are very similar, this is where the similarity stops. Winix 5500-2 improves over every aspect of the outgoing 5500 to ensure clean air delivery and a great user experience.

The improved filtration process on the 5500-2 brings a 4-stage filtration compared to the 3 filtration stages on the previous model.  This allows 5500-2 Air purifiers to remove odors, chemicals, gases, dust, smoke, pet hair, and many other air pollutants thanks to the added AOC filter. Advanced AOC filters can tackle every odor and VOCs bring your indoor air pollution to a bare minimum, according to the EPA. The washable AOC carbon filter can be washed when required to ensure clean air delivery.

The newer 5500-2 also adds another fan speed adjustment level while also reducing the overall fan noise when compared to the previous model.  Thanks to the added air filters and more advanced tech, the Winix 5500-2 offers more effective air cleaning over the Winix 5500-2.

Winix 5300, and 5500, are the older versions of Winix 5300-2 and 5500-2, respectively. These two models have been compared for their speed, efficacy, air purification techniques, and many other aspects.

These models have some similarities and some differences from one another. These differences include the following:

Other than the technical specifications, both of them were compact air purifiers, used similar air purification mechanisms, and offered excellent filtration of common air pollutants.

Which Is The Better Air Purifier?

Both Winix 5500-2 and 5300-2 are ideal for moderate to large rooms with a surface area of 360 square feet. Winix’s proprietary technology, PlasmaWave, ensures that bacteria, viruses, fungal spores, and other micro-organisms are filtered out successfully so you can enjoy safe, healthy air. The 4-stage filtration enhances the air purification ability of both newer models over their predecessors, the Winix 5500 and 5300.

Considering their air purification prowess with 99.97% removal of air pollutants thanks to the True HEPA and activated carbon filters, both models are worth spending money on. There are minor differences, and you can choose any of the two models depending on your preferences.

To recap, the Winix 5500-2 extras include washable advanced filters, a remote control facility, and an added warranty. On the other hand, the 5300-2 works quieter and consumes a little less energy than its more advanced sibling.