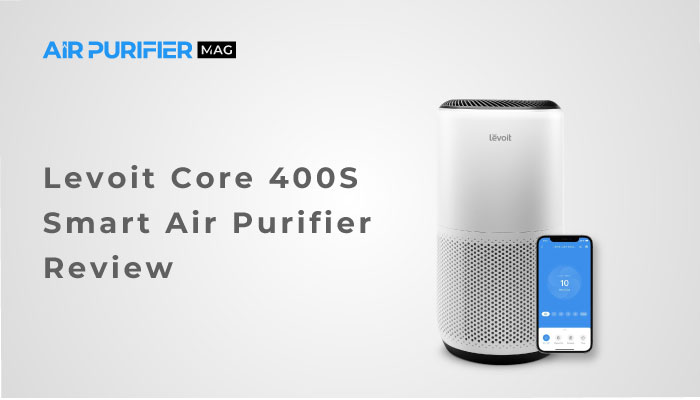 In this Levoit Core 400S Review, we will break down every detail that you should know before you make a purchase.

Levoit Core 400S is one of the best air purifiers out there. The 400S belongs to the latest series of Levoit Air Purifiers that will take care of air pollutants and deliver excellent performance without breaking the bank.

The new model brings significant improvements over the LV-H133 and at 403sq. ft., it covers more space than the P350, which only covers 219sq. ft. The attention to detail and the user-friendly features have made Levoit a household name in the US.

The 400S is basically what a modern air purifier should be. It takes the success of the larger Levoit LV-H133 and adds smart features to it. The size and purifying capacity make it a great option for bedrooms and even larger spaces. It can easily purify a 403 sq ft room 5 times an hour.

The model also boasts Levoit’s proprietary QuietKEAP (Kinetic Absorption Pad) Technology that ensures a low 24dB sound level thanks to active noise dampening with rubber pads. You can enjoy a good night’s sleep without worrying about the noise or the costs as it only consumes 38W even at the highest settings.

A great purifying experience is made even better with the Levoit VeSync app and smart controls that allow remote access to the purifier while also opening the door to home automation as the machine connects to voice assistants like Amazon Alexa and Google Assistant seamlessly.

When it comes to smart features, there wasn’t much competition out there as the Leviot Core 400S would be competing with the likes of Blue Pure 411 Auto, Blue Pure 311 Auto, and the Winix AM90. Indeed, there are some more advanced air purifiers out there that offer an extra stage of filtration but they can’t compete with the 400S thanks to the excellent utility and ease of use.

Even the higher-end LV-H133 lacks the advanced features that the Levoit Core 400S boasts while also having a similar price point. Though the 400S starts at $219.99, it is available with good deals starting at $197.99.

Consumers made Levoit the top brand for air purifiers and rightly so as every Levoit product is well thought out and each iteration brings improvements. The previous models like the LV-133 and the 135 were heavy and had some shortcomings, all of which were addressed in the Core 400S.

The design looks the same as the Levoit LV-H133 and you can immediately identify the Levoit design cues, but that’s where the similarities stop. The material has been changed and the newer body is much lighter and more efficient.  The white and black body and trendy mesh for airflow mean that the air purifier will look great in any setting and can help your rooms look and feel great. Levoit is expected to bring more color options with time, such as the Core 300 before it also added a black variant shortly after launch.

The change in the fan type and speeds has allowed the Core 400S to feature a dedicated night mode thanks to its super quiet dB noise levels. At 20.5 x 10.8 x 10.8 inches, it is not as big as its other siblings but still offers great performance for the form factor.

The 360-degree air circulation, the inclusion of a touch screen up top, and the lights-out setting make it an extremely friendly choice for under $200. Air quality is constantly monitored by the laser sensor placed at the air intake point. Small air spaces mean the fan has to operate at higher speeds but the 400S solve this design flaw with large air spaces that allow the air filter to absorb as much dust and other contaminants, making it more efficient and quieter than the competition.

The Levoit 400S weighs only 11 lbs, which greatly helps when changing the air filter. The handlebar around the back helps maneuver the device around when needed.

Users have reported a drop in contamination levels from 35 to 7 (PM2.5) in just eight minutes, making it one of the best air purifiers out there. The filter options on the 400S take care of household dust, airborne pollutants, and other gaseous pollutants.

The 400S is particularly popular with people with allergies as it has shown that it can help with health conditions with its improved filtration through the 3-stage filtration system.

Levoit has tasted huge success but has stayed away from anion purification methods as the manufacturer believes that the 3-stage air filtration system is more successful and fail-safe thanks to its purely physical nature.

VortexAir™ Technology makes sure the air keeps circulating through the filters nicely. The mix of filters also carries the CARB (California Air Resources Board) certification as this True HEPA Air Purifier meets the ozone emission concentration limit of 0.050 parts per million (ppb).

HEPASmart™ Technology is also a trademark of Levoit that makes its debut in 400S. Although the difference it brings is neither documented nor disclosed, users report similar performance to the H13 True HEPA Filter found in previous models.

Levoit Core 400S performed excellently in performance statistics. Within eight minutes the PM2.5 levels plummeted by 28 units and 99.92% of the indoor air was clean and circulated through the nifty 3-stage filtration system.

This means all particles including pet dander, bacteria, fungi, dust mites, and even smoke particles will be filtered out of the air within the hour mark as the 400S boasts an ACH (Air Changes Per Hour) of 5X. This means that the air purifier can clean the air 5 times per hour. The HEPA filter filters out all microscopic particles down to 0.3 microns. The numbers might not be industry-leading but offer excellent performance for the money and can bring down allergy symptoms within minutes, meaning it has one of the best performance/value ratios in the air purifier industry.

The Levoit Core 400S-RF is an excellent addition to the Levoit family and is compatible with most Levoit products. The filter life can be easily monitored through the VeSync app and will notify you when the filter needs replacement.

For the price point, only Coway AP-1512HH and Winix AM90 have comparable clean air delivery rates (CADR) of 260 cfm making the Core 400S one of the best performing air purifiers out there.

The whole functioning and operation of the Levoit Core 400S is both quiet and is extremely user-friendly. The touch screen functionality coupled with the VeSync app brings all controls to your fingertips in a seamless fashion.

The operation is extremely quiet with the QuietKEAP technology and the addition of a lights-out feature has made it very user-friendly. This also goes to show Levoit’s commitment to user feedback as many users felt annoyed with the persistent lights on the previous models.

The 400S is quieter and has more fan adjustments than the Levoit Core 300.  This is made possible through the use of rubber pads and aerodynamic fan blades that make the operation quieter even with higher fan power. At the lowest speed setting, the noise level is measured at 24 dB of noise.

When the fan is switched to its maximum settings, it can get a little noisy as the noise levels reach 52 decibels. Throughout our testing experience, the noise was barely noticeable as it is quieter than a refrigerator.

The energy star rating ensures that the air purifier won’t be that heavy on the pocket and will only consume 38W even in the highest settings. It’s very impressive for the level of performance that the 400S puts out. Only the Blue Pro 311 consumes less than the Levoit Core 400S and that too is by a small margin.

Final Verdict – Is the Levoit Core 400S Worth it?

The Core 400S brings improvements in efficiency, power management, air filtration, and even cuts down the weight and size while maximizing performance as compared to its predecessors.

The user-centric decision to turn the lights off and offer remote control through the VeSync mobile app shows the dedication that Levoit has towards its customers. Sleep mode will ensure good air quality as it will keep air purification going at low speeds so you’re not disturbed by the fan noise or the lights.