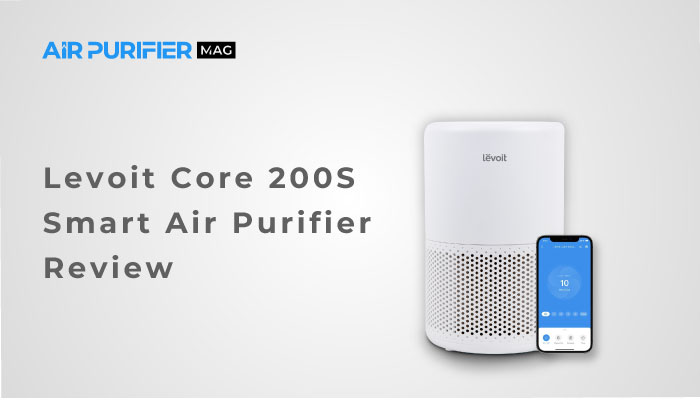 Levoit’s ease of use and excellent performance have propelled it to the top. The new S line of air purifiers is making rounds everywhere owing to its excellent design and value for money. The new Levoit Core 200S is no different and offers 99.97% protection against air pollutants. Its under $100 price point is a fraction of what other manufacturers are charging.

The 200S is a great offering that can give many flagship models from other companies a run for their money. The core 200S covers 183sq.ft. and that too with a quiet operation of 24dB. The excellent craftsmanship and elegant design that weighs only 3 kilograms, allows the Core 200S to offer 360° protection further cementing the pedigree of Levoit as an excellent air purifier manufacturer.

The Core 200S has all the bells and whistles you’d expect from a quality manufacturer and brings the features of its bigger siblings. Let’s dive deep into in-depth Levoit Core 200S Review.

The 200S takes its design cues from its more expensive siblings and brings their features too. The feature set takes the tried and tested Levoit LV-H133 and LV-H135. This brings some additional smart features. The major difference between the Core 200S and the 400S is the purifying capacity. The Levoit Core 200S can filter a 183sq.ft. room 5 times in an hour.

Like the more expensive Levoit Core 400S, the 200S also features Levoit’s proprietary QuietKEAP Technology. The technology uses a number of different design features and fan speeds to ensure a quieter 24dB operation. This is made possible thanks to the active noise dampening with rubber pads.

Intuitive and thoughtful features like the display off button make it hard to overlook. At only 37W, the purifier consumes less electricity than most of the competition even when used at the maximum settings.

Levoit introduced the Core 200S to incorporate the trendy smart features and smart controls that allow remote access to the purifier. The voice control features allow easy integration with Google Assistant and/or Amazon Alexa. The VeSync app from Levoit allows the users access to the Levoit dashboard for monitoring the operation of the purifier. Also, the filter indicator light comes up when you need a replacement making the use ever so easy.

The Core 200S is not the most innovative air purifier out there and there are many other advanced options that offer added filters and electrostatic filtration but the 200S gets the job done at a fraction of their cost. Older flagship models from Levoit like the higher-end LV-H133, LV-H134, LV-H135, and even the top models from other manufacturers lack any smart feature and some even lack scheduling and timers. At under $100 the 200S is definitely a bargain.

The Core 200S boasts a simple, yet effective design that takes its cues from other Levoit products. Levoit has been known to produce customer-centric designs and always comes up with improvements in the newer models and the Core 200S brings improvements of its own.

The design looks the same as the Levoit LV-H133 and is a miniature of the 400S that covers more space. The S lineup is both lighter and more efficient than the previous ones. In addition, the sleek design adds to the beauty of the room and looks non-intrusive.

The fan speed can be adjusted to suit the needs of the user and the night mode reduces the speed to produce just 24dB. At 8.07 x 8.07 x 12.6 inches, it is an excellent cylindrical design that brings 360-degree air circulation to the table. The top air outlet is beautifully decorated with a touchscreen.

The air intakes are small and numerous ensuring the rushing air doesn’t produce audible noise. The small air spaces direct air towards the 3-layer air filters to absorb as many contaminants as possible. This directional airflow design allows for an efficient and quieter operation.

The Levoit 200S weighs only 6.6 lbs and can easily be moved around, making it one of the easiest to handle portable air purifiers.

The filter in the Levoit Core 200S comes with a filter life of around 1 year with moderate use, and users have reported that the filter can be vacuumed to regain some filter life. The filter contamination level can be seen through the VeSync App and replacement filters can also be ordered from there.

Users are content with the protection it provides against allergies as it can filter out odors, household dust, airborne pollutants, and other gaseous pollutants with a mix of 3 filters.

The Levoit 3-stage filtration system is excellent and well thought out and it’s nice to see the same system used on much pricier models making its way to the budget Core 200S.

The #1 air purifier seller in the US is highly trusted with their 3-stage and 4-stage filtration systems. All the purification is mechanical and there is little chance for anything going wrong. This dependability has made Levoit the top seller but testing reports that with continuous use the filters need replacement every 6-8 months instead of the advertised 1 year.

The filter health can be conveniently checked through the app and ordering a new one is very convenient too. Levoit’s HEPASmart™ Technology also makes the cut and it’s surprising that Levoit has packed a lot of tech and features in a relatively cheaper model. Users report similar performance to the H13 True HEPA Filter found in previous models.

With an air change per hour of 5 times, the Levoit Core 200S is definitely a force to be reckoned with.

Airborne particles including pet dander, microbes, common fungi, dust mites, and even smoke particles can easily be filtered out within an hour. The ACH (Air Changes Per Hour) of 5X means that the indoor air will be passed through the 3 filters 5 times and the TrueHEPA filters with a success rate of 99.97% in every cycle.

This leaves nothing to the imagination as users have reported a significant decrease in reaction towards allergens. Even users living in an industrial zone with a constant odor reported an odorless and allergen-free experience with the Core 200S and that too in less than an hour.

For the price, the feature set and cleaning efficiency are on par, if not better, than the competition as it offers an excellent performance/value ratio. The VeSync app will notify you when the filter needs replacement.

The Core 200S pulls in air through the bottom and sides and pushes it out through the top. The whole operation is quiet and efficient. The air spaces on the top have a touch screen that can be completely dark in the lights-out mode.

The newer models, the 200S and 400S, are quieter and offer more control over the fan speed than the Levoit Core 300 and even some flagship models. At the lowest speed setting, the noise level is measured at 24 DB of noise. This can go up to 48dB at the maximum speed but users have reported that to be quieter than other fans.

At 37W usage rating and 0.8 Watts standby rating it is extremely cheap to operate as the electricity costs would be minimal. There are very few air purifiers at this price point that offer comparable performance to Levoit Core 200S, and even those that do consume a lot of electricity.

Final Verdict – Is the Levoit Core 200S Worth it?

Yes, the Levoit Core 200S is an excellent air purifier for small rooms that offers a 3-stage filtration system filtering out 99.97% air contaminants. It’s also one of the few air purifiers that offer smart features and that too under $100. The Core 200S checks a lot of boxes and the seamless connectivity with automation services is commendable.