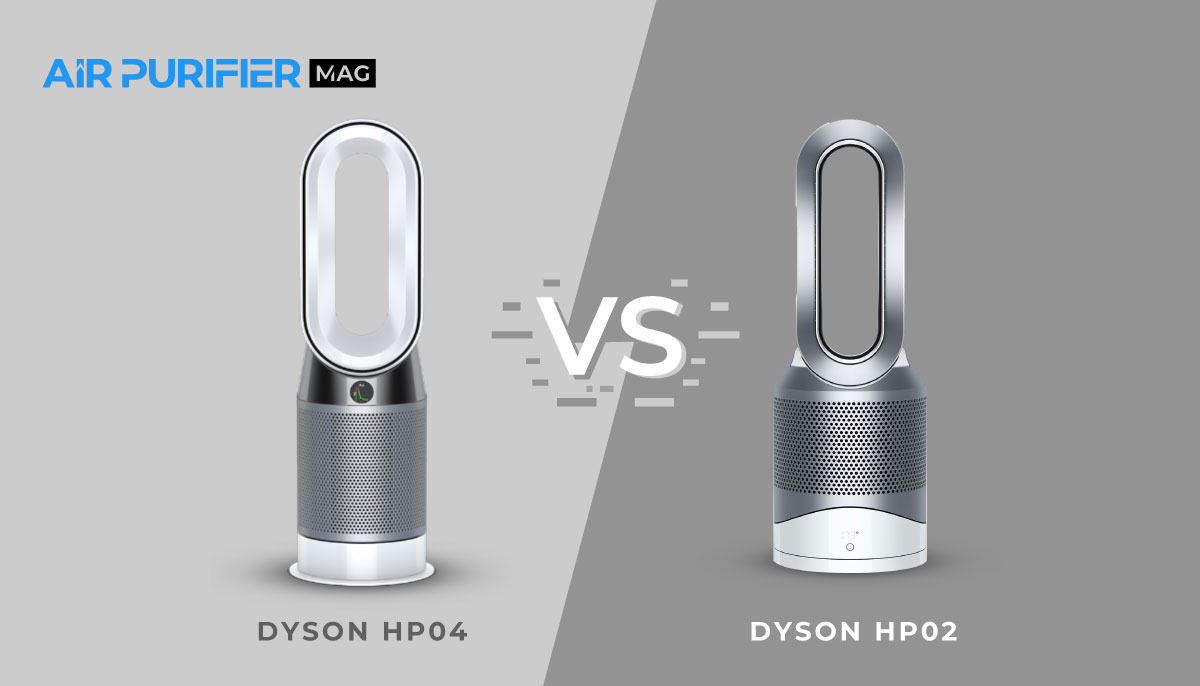 The market is full of air purifiers that offer ample protection against airborne contaminants but Dyson has made a name for itself thanks to its innovative features and thoughtful devices.

If you’re looking for a Dyson air purifier you might have considered the HP02 and the HP04 largely because they share a lot of Dyson’s proprietary features, but it is the differences that help one take the lead over the other.

So, What is the difference between Dyson HP02 vs HP04?

Dyson HP04 looks more attractive on the spec sheet as it brings almost 360-degree rotation, LCD display, carbon filters, and the ability to throw out air through the back. Whereas, the Dyson HP02’s extra features include Dyson app connectivity but it cuts corners when it comes to the carbon filters and the innovative backflow mode.

While the spec sheet looks painfully similar for both these purifiers, we understand that some features are difficult to understand. This guide will help you understand what each purifier offers in detail, so you can make an informed decision.

Dyson air purifiers are specially designed to deal with air pollutants, pet hair, microbial organisms, pollens, allergens, and other impurities that may flare up allergies and both the HP02 and HP04 serve this purpose well.

The Achilles heel for the HP02 is smoke, as the purifier struggles against dense smoke or odors because of the absence of dedicated carbon filters. More on this later here is a brief comparison between these two amazing models:

As you might have noticed that there is a huge difference in power consumption of the two purifiers and both use a very different combination of filters to bring about air purification.

The higher power consumption on the HP04 is not because of efficiency but offers a whole house purification experience. Here are the differences and similarities in detail.

Dyson HP02 vs HP04: The Differences

Let’s start with the differences:

The Dyson HP02 and HP04 have different angles of rotation. The HP02 rotates at an angle of 180 degrees while the HP04 has an adjustable oscillation angle of 350 degrees which circulates air in the whole room, making use of the additional power that the purifier offers.

The HP02 does not have carbon filters while the HP04 model has carbon filters. Carbon filters equip the HP04 with the ability to remove odors, VOCs, and other harmful gases to provide you with clean, safe air.

The HP04 has an LCD display that indicates the room temperature, humidity, and air quality while the HP02 does not have this feature so you can only monitor these things through the Dyson link app.

The HP02 is not equipped with the backward airflow mode while the Dyson HP04 air purifier is. This allows it to allow air purification for a larger space regardless of whether you want to use the heating feature or not.

Dyson HP02 vs HP04: The Similarities

Here are the top similarities you’ll find in both purifiers.

Their HP02 air purifier is an advanced model of Dyson HP01. In addition to purifying air, it also acts as a heating and cooling unit. However, it can not be confused as an air conditioner as it does not have Freon gas, a main component in cooling units.

It can be controlled by remote control or through the Dyson link app. You can schedule and control the heater through the app which makes it a customer’s first choice.

You can also connect your Dyson HP02 air purifier with Alexa to control it through a mere voice command or an Echo device. It also includes the following features which make it unique and an ideal option for users:

Dyson HP02 comes with a remote controller so you don’t need to move all the way to your device. You can easily control it by clicking some buttons.

Dyson always tries to upgrade its models and equip them with the latest technologies. Dyson HP02 is wifi enabled, unlike its ancestor HP01. You can easily control it through a Dyson link app or Alexa. This makes it very user-friendly and future-proofs your investment.

Dyson HP02 not only works as a purifier but also as a heating and cooling unit. It can give you warmth on cold days and keep you cool in the summers. However, most users confuse it with air conditioners but it’s important to note that it is definitely not one. The HP02 acts as a normal fan by simply circulating air in the room.

It comes with air quality sensors that immediately notify you when they detect harmful airborne particles. They can immediately sense pet dander, allergens, and other impurities residing in the air and automatically start purifying it.

It comes with a glass HEPA filter which is capable of removing 99.97% of pollutants like allergens, microbes, pet hairs as small as 0.3 microns.

The Dyson HP02 is appreciated for its sleek and beautiful design that enhances the beauty of your house. It is light weighted (about 8.6 lbs) and easy to carry around if you’re planning to move it around the house frequently.

Additionally, it has been praised for its bladeless technology. That means you don’t have to worry about your kids accidentally putting their fingers in its fans. It’s easy to clean and completely safe for use.

The absence of an LCD display and the quality of the oscillating system can be something that you don’t agree with but it is definitely futuristic and efficient.

Making sure that all the information you get is authentic and verified we tested Dyson HP02 by a Standard Air Purification test. We let the air purifier run on high settings in a room with a high amount of pollutants and recorded the initial and final values. Here are the results we gained:

Dyson’s HP04 air purifier has always been a customer favorite. Just like the HP02 model it acts like a fan, air purifier, and heater all at once. It has the ability to oscillate 350 degrees which HP02 cant. It has also a backward airflow setting which makes it unique.

It comes in 3 different sizes and several colors. Due to its beautiful tower design and durability, it complements very well with any home decor. It is equipped with advanced features and technology, some of them are described below:

Just like HP02, the HP04 model also comes with a remote control which makes it easy for the user to set up the device according to his own preferences.

It is provided with a modern LCD display that indicates the room temperature, humidity, and air quality.

The Dyson HP04 air purifier has an awesome oscillation feature. It can rotate up to 350 degrees making sure that the air circulates in the whole room. Due to this, it is suitable for all small and large rooms.

One of the amazing qualities of this model is that it is not noisy. You can barely listen to the fans on medium and lower settings. By setting it on night mode the fans will run on the lowest settings that help you sleep peacefully.

The HP04 has two carbon-activated filters and 2 HEPA filters which eliminate impurities and pollutants up to 99.97%.

With buttons on each side of its base, it allows you to unlock the outside panel and provides access to the filters. This feature aids in easy cleaning of the air purifier.

Additionally, it facilitates the users with a distinctive manual tilt feature provided on its base which helps them place the device in any position they like.

The overall performance of the device is excellent and is complemented by the ability to connect with Wifi and Dyson link app.

You can adjust most settings of the unit through the app allowing you to start the purification before you arrive yourself.

Making sure that all the information you get is authentic and verified, we tested Dyson HP02 by a Standard Air Purification test. We let the air purifier run on high settings in a room with a high amount of pollutants and contaminants and recorded the initial and final values. Here are the results we gained:

Dyson has the best air purifiers in its ranks and the continuous improvements that they bring help their purifiers stand out from the competition.

You might be inclined towards HP02 because of the similarities it has to the HP04 model and the inclusion of extra features like mobile app control which the HP04 lacks. But if you’re looking to get rid of odors, the Dyson HP04 is just better.

We’ve included all the details, similarities, and differences that you’ll need to decide between the two. So which one do you like?