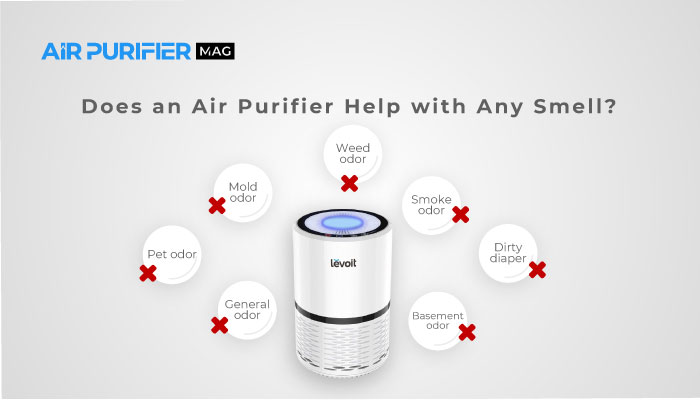 Tired of the stubborn odors around your space? According to the Agency for Toxic Substances and Disease Registry (ATSDR), odors can lead to headaches, irritation, and in some cases, even depression. There are a few remedies available that mask the smell but fail to take care of the root cause.

If you’re looking for a solution to your odor problem and are wondering, does an air purifier help with smell?

Yes, air purifiers are extremely efficient against odors and can filter airborne contaminants from the air. They can improve indoor air quality and ensure a steady clean air delivery rate, so you don’t have to worry about allergens and unpleasant odors. Odors and allergens can cause many health issues and can make asthma symptoms worse.

Can an Air Purifier Remove Any Smell?

Yes, a powerful air purifier can filter out any smell-causing particulates and can neutralize foul odors. Some air purifiers can even add a scent by burning essential oils or perfumes to keep your indoor air fresh and breathable. Air purifiers feature different types of filters that tackle different contaminants.

Air purifiers have evolved with time and can now filter up to 99.97% of contaminants, according to the Environmental Protection Agency (EPA). They do so with the help of different filter configurations and innovative technology. Not only do they bring down the number of airborne particles, but they also improve the breathable air quality. This can help alleviate health conditions, according to research.

So how do air purifiers help with the smell, and do they only help with it, or can air purifiers eliminate smell altogether? This guide will help you understand how common types of smells become strong odors and how an air purifier functions to tackle various smells at a molecular level.

Common Odors Around the House

Everything humans consume or use leaves behind something that can rot and decompose, leading to distinct odors. The list is endless: paint odors, food leftovers, pet smells, kitchen odors, and whatnot.

These different types of odors can prove to be very irritating and can cause a number of issues. Let’s break down the common smells around the house to understand them better.

Every space has a distinct smell. Remember the aroma of grandma’s cooking? Well, apart from the aromas, odors can become part of a place too, and your brain can develop ‘smell memory’ of that place, triggering a response whenever the nose picks up that smell.

According to research, different types of smell can lead to a different kind of change in the behavior of a person. People use all sorts of things to tackle odors like scented candles, ozone generators, portable air purifiers.

As indoor odors can affect your mood and attitude, it’s best to keep the air free of odors and organic chemicals. A HEPA Air Purifier with activated carbon works great against most odors and can even handle VOCs.

Pets, like humans, shed little flakes of skin every day. The process is ongoing, and this pet dander can lead to a very unpleasant odor. The American Pet Products Association (APPA) estimates that 70% of US households have a pet. This means that pet dander and other pet allergens can lead to allergies, and according to the Asthma and Allergy Foundation of America, it can trigger severe asthma attacks and can make allergies worse.

It is important to filter out the pet dander before tackling the pet odors. Activated carbon works by absorbing the odor, causing minuscule particles and neutralizing smells.

Molds can be a persistent threat to your peace of mind. Molds and other household fungi spores can trigger allergies and can even emit VOCs that can release ozone into the air. Spores can take root and leave behind a toxic smell that lingers on even after the source is dealt with.

Musty smells and allergic reactions can be precursors of hidden mold growth. While the particles can be filtered out by a HEPA filter, according to the EPA, UV light treatment may be required to stop the mold from forming over the collection side of the filter.

Smoke can come from various sources, and not even one of them is safe. Smoke is a mixture of particulate matter and gaseous pollutants that can prove detrimental to health with prolonged exposure. According to fact sheets from EPA, smoke can lead to heart disease and even stroke.

Smoke can penetrate furniture and other upholstery. This causes the smell to linger long after the smoke-causing sources are taken care of. With rising temperatures, wildfires have become very common, wildfire smoke is even more dangerous, and the EPA requires ample protection to be in place for individuals and even stronger protection for children.

With central cooling and heating comes the caveat of stale air. Cooking odors can stay around for quite some time after a cooking session and comprise of chemicals and compounds that can be irritating for the eyes, nose, and lungs, according to the New York Department of Health.

While the sizzling might sound interesting, it releases volatile organic compounds (VOCs) into the air. Thankfully, ventilation and air cleaners offer good protection against such odors.

As the US is legalizing weed, its usage both indoors and outdoors is on the rise. Weed smoke is a tad bit more dangerous than cigarette smoke as the weed joints lack a dedicated filter.

Weed odors are a mixture of particulate matter and chemical compounds. Like cigarette smoke, weed smoke can have as many as 3000 different chemicals, according to the American Cancer Society, and needs to go through a complex air filtration process to neutralize its effect.

Got a baby in the house? Diaper smells can easily become part of ‘smell memory’ and can leave stressful memories about a place as odors are known to affect human behavior. Home remedies for diaper smell include baking soda, but that is nowhere as efficient as a good quality carbon-based air purifier. Air purifiers with a 3-stage filtration system take care of air contaminants and can absorb a wide range of odors.

Having a basement is nothing short of a blessing until space starts to smell and is infested with mold. The basement is usually damp and has all the wiring and piping in it, and is the preferred spot for mold growth. Awful odors can originate from a closed and damp space that can irritate the lungs, eyes, and nose. These can also make health conditions worse.

Air purifiers can tackle the smell and can neutralize mold spores with 3, or 4-stage filtration processes, but for an effective solution, the mold will have to be physically removed, and the source will have to be treated.

Which Filter Works Best Against Odors?

An Activated Carbon filter is most efficient against smells and any unpleasant odors. Carbon filters have been in use to neutralize smells for quite some time now, but most purifiers for odors now feature activated carbon. This adds to the efficacy of carbon in tacking the smells.

While the carbon filter is most efficient against odors, it comes with its own cons, such as off-gassing. Here are some of the most popular filters used in air purifiers.

Activated carbon filters work best when it comes to absorbing airborne chemicals. They are efficient against VOCs that cause odors. The efficacy of the filter is dependent on the thickness of carbon structures and their design. Some carbon filter designs incorporate complex mesh that forces the air in and ensures maximum contact with the air. This design works best and is more efficient than plain ones.

The complex design also adds to the amount of carbon present and hence improves the odor removal of the filter.

The only drawback of using carbon filters is the issue of off-gassing. The issue comes when the carbon is saturated or whenever there is a sharp change in the temperature or humidity levels. According to research, any such change can cause the carbon filter to release back VOCs into the air. It is recommended to use a higher weight of carbon and replace the filters whenever the filter is saturated. Even when the filter is not saturated, the carbon can give off some VOCs.

High-Efficiency Particulate Air Filter or a HEPA Filter, for short, deals with particles of different sizes. High-quality ones and medical-grade HEPA filters can filter down to a size of 0.3 microns. They cannot remove odors, VOCs, or other chemicals because of their minute sizes and gaseous nature.

If used in moldy places without maintenance, HEPA filters can serve as a breeding ground for mold and may start giving off a musty, unpleasant odor. This is caused by trapped particles on the collection side of the filter and damp conditions that favor bacterial/fungal multiplication.

The problem of microbe growth on HEPA filters can easily be solved with a UV-C germicidal lamp on the collection side of the HEPA filter. This light kills the microbes. Although they can kill microbes, the time taken to kill is quite a lot, and they come with their own con of accidental ozone production. Too much ozone in the air can be a breathing hazard.

This makes HEPA filters quite ineffective against most odors.

Filtering particulates from the air can help improve air quality but does not help much with treating the smell. These bothersome odors need to be tackled at a molecular level by carbon and activated carbon filters. Advanced air purifiers use a mix of different air filters to ensure good air quality.

Some manufacturers call the activated carbon filter a charcoal filter and are just as efficient at handling smells. Generally, an air purifier for smells uses a pre-filter to trap large particles, followed by a HEPA filter to trap particles down to a size of 0.3 microns with 99.97% accuracy, and finally through an activated carbon filter to treat the gaseous particles. Some air purifiers go an extra step by adding UV light and ion-based filtering. These extra processes add to the efficiency and make a purifier for odor elimination even more effective.

So… Does an air purifier remove smell??

Yes! Air purifiers are excellent against smell as evident from numerous researches and various health departments. In the fight against the smell, air purifiers go the extra mile and tackle allergens among other irritants to ensure an excellent experience.

Still, have questions? Here are some of the top queries that consumers have when looking for a solution to smell.

Do all purifiers work well against smells?

No, there are different types of air purifiers, and each one caters to the specific needs of consumers. Where some are excellent against particulate matter, others are more efficient against VOCs and odors. For smells and organic compounds, a carbon-based filter is necessary, and only air purifiers feature that will be effective against smells. Carbon is porous and adsorbs odors and airborne chemicals.

Are odors difficult to filter from the air?

Yes, odors are difficult to filter because most purifiers use mechanical filtration like HEPA air purifiers and are not equipped to remove VOCs and other gases from the air. They can filter larger particles such as dust, pet dander, and pollen but fail against gaseous elements. Carbon filtration is most effective against VOCs and other gaseous elements.

Related Article: Why Air Purifier Smells Like Plastic or Burning?