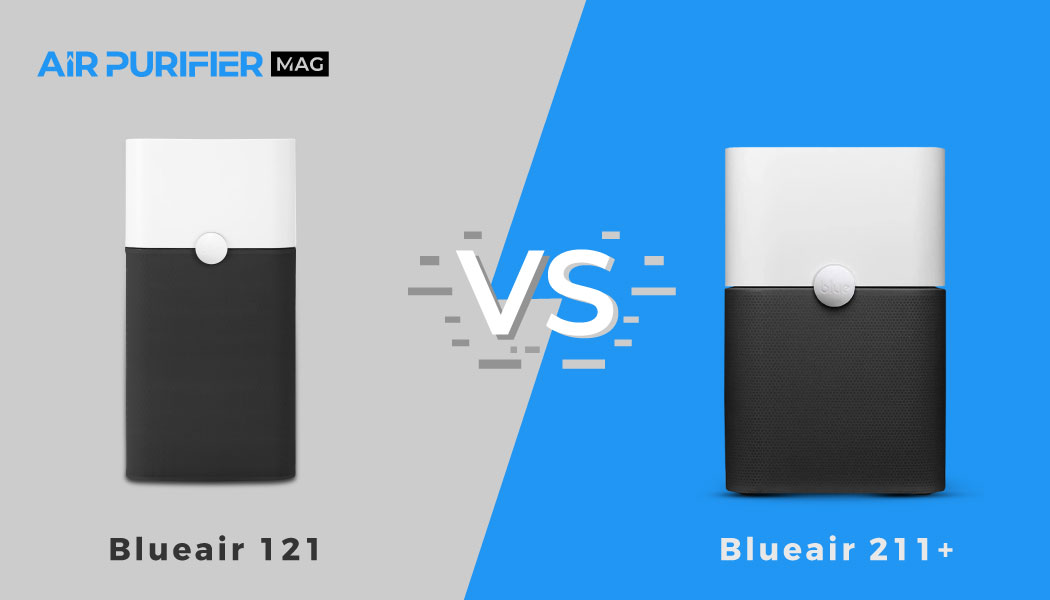 Choosing an air purifier is never simple and people often make the wrong choices based on hearsay. Blueair has established itself as one of the best air purifier brands in the US and rightly so, as their air purifiers bring stellar performance ratings. If you’re looking for a powerful air purifier and are confused because of the Blueair 121 Vs 211+ debate, you’re in the right place.

The reduced CFM doesn’t mean that the 211+ is inferior. This guide will help you understand the differences between the two and will help you decide which one is the most suitable air purifier for you.

Need a quick head to head for the Blueair Blue Pure 121 and the Blue Pure 211+, this table has all the information you’ll need. Read on for a more detailed comparison of two of the best air purifiers on the market that use a combo of mechanical filtration and electrostatic filtration to ensure optimal indoor air quality.

Blueair Air Purifier technology is different from the one other manufacturers are employing. While there is no HEPA grade filter, a mix of other advanced filters and electrostatic filtration achieve the 99.97% efficiency that a HEPA filter brings.

The Blueair Blue Pure 211+ takes a lot of design and functionality cues from the hugely popular Blue Pure 121. Both models have approximately the same dimensions but Blue Pure 121 can seem a little bit slimmer and compact because of its increased height.

Here are the top features that both these air purifiers share and an explanation of what each feature set brings to the table.

Both the Blue Pure 121 and the 211+ bring Blue Air’s proprietary HEPASilent™ Technology. This brings a 4 stage filtration system that uses mechanical filtration to trap solid air pollutants and an electrostatic system to trap any remaining airborne pollutants.

The mechanical filter is a combination of a fabric washable pre-filter, a particle filter for particulate matter, and an activated carbon filter to take care of odors from pets and other organic compounds.

The fabric pre-filter acts as the outer facade of the air purifiers and comes in five different color options: blue, pink, yellow, black, and grey.

It provides the primary filtration of the larger particles like hair, pet dander, pet hair, or lint. It can be cleaned easily using vacuum motors or can be washed in a washing machine. The only demerit of this pre-filter is that you can see all these particles sticking to its outside surface.

The air then makes its way through the particle filters that help remove 99% of contaminants including dust particles, pollen, mold spores, dust mites, and even smoke particles.

Carbon filters can easily handle common odors like light household odors, but if you want a stronger odor reduction, coconut carbon filters from Blue Air are an excellent option. This can handle heavy household odors and will neutralize any terrible odor in no time.

Both Blue Air models bring the luxury of an electrostatic precipitator that brings a unique type of electronic filtration that charges the indoor pollutants like an air scrubber and causes them to stick to the filters more efficiently.

ESP and mechanical filters efficiently reduce particle concentration in the air and ensure that no airborne allergens escape these compact air purifier models. The efficiency of the system allows for HEPASilent branding as it is as efficient as a True HEPA filter and doesn’t bring the noisy fan motor that needs to be installed behind a HEPA filter. This also allows Blue Air to use less dense filters, making their purifiers both quiet and energy-efficient.

Although the 211+ has a lower CADR it still has the same power consumption as the 121. This is because both the air purifiers use the same fan motor and filter designs.

Both air purifiers are energy-star rated so you can use them 24 hours a day without worrying as they boast excellent stand-by and peak consumption numbers.

Both units work on 30-60 watts which is quite less compared to other identical-priced air purifiers in the market.

Replacement filters are easy to find and the whole process is made even easier because of the filter replacement indicator light that increases the ease as a built-in LED warning system glows red when it’s time for a change.

Both models bring a similar 6-month filter life. The pre filters are replaceable in both models however carbon filters can only be replaced in Blue Air 121, that’s why most people favor it instead of Blue Air 211+ if odor control is a priority.

Both air purifiers have a sleek and modern design. The pre-filters are replaceable and come in different colors.

You can find a simple button in the center so there is no need to worry about complex buttons and knobs. It controls the three-speed modes of the filter fan. The led light of the button tells you which setting is on and automatically dims at night time so you can sleep peacefully.

Both devices are entirely manual, have no wifi or Bluetooth connectivity, and do not have a timer or remote control.

Where Blueair Blue Pure 121 brings a 400 cfm CADR, Blueair 211 prefers efficiency and settles for a 350 cfm. If you have a small to medium-sized room, this shouldn’t be a problem. But if you’re going to use it for 500 square feet and up, the lower CADR will increase the time needed to clean the indoor air.

The 121 comes with an option to upgrade its carbon filter. The standard combination of the carbon filter and Combination particle helps eliminate light household odors like mold, smoke, trash, pet odors, etc. For heavy odors, you can use the activated coconut carbon pallets.

If you’re in or around an area that has heavy odors, then the 121 can be an excellent choice. The 211+’s air filter cannot be upgraded.

The energy consumption on the 211+ is the same as the 121 despite having a smaller footprint and a lower CADR. This reduces the performance per watt for the 211+, making the 121 a better and more prudent purchase.

While the 121 delivers optimal performance even in extra-large rooms, It has a CADR of 400 and can easily cover rooms up to 620ft.

For smaller rooms that are up to 540sqft and the Blue Air 211+ is definitely the right choice.

The Blue Air 121 is the better air purifier out of the two options but considering how it is more expensive and does not bring any additional features or performance benefits the 211+ is the more radical choice.

The 3-part filtration system, colors for purchase, and warranty periods are similar across both of them. So unless you have a very big area to cover you should go for the 211+ or if you’re willing to pay a little extra, the 211+ Auto brings real-time air monitoring with automatic fan speed adjustment and is definitely worth a look.

Still skeptical or on a budget? Here are the best air purifiers you can find under $50.