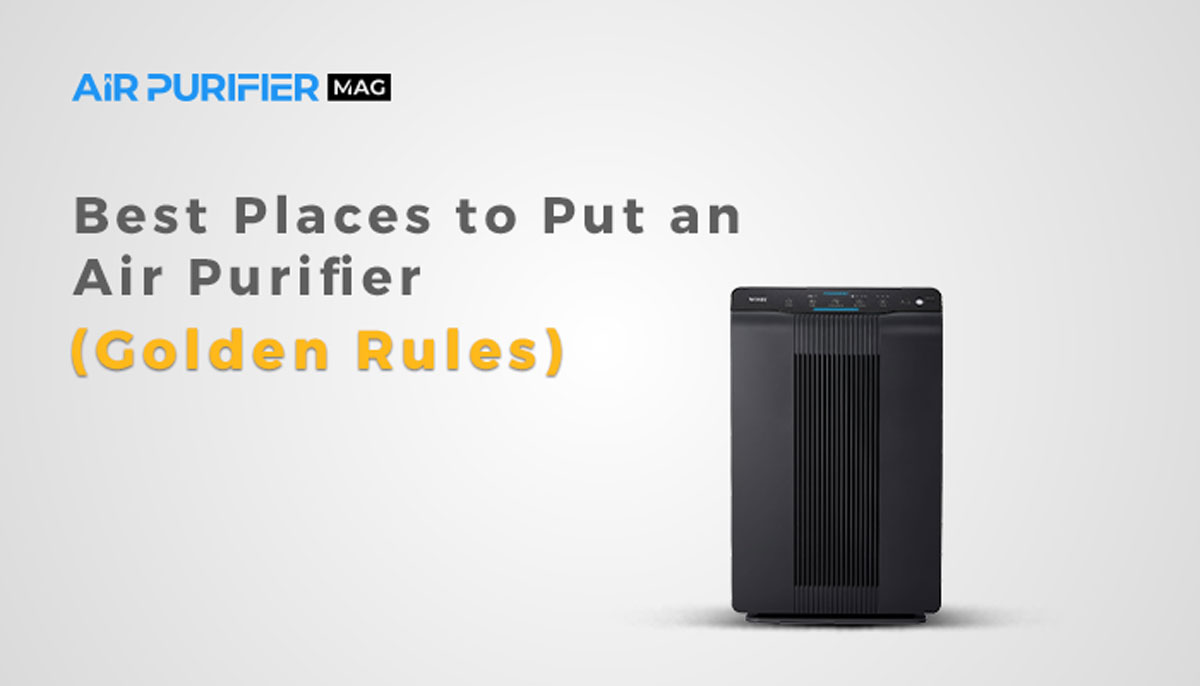 According to the EPA, inferior indoor air quality due to pollutants has been linked to a vast range of adverse health effects such as respiratory diseases like asthma, fatigue, allergies, irritation, and etc. However, if you have purchased an air purifier and have not noticed any positive results in the quality of the air inside your home, chances are that you are positioning it incorrectly.

Hence, If you want to know all the correct, strategic places to position your air purifier to achieve the most out of it, then keep on reading. We will be presenting the 5 best places to put an air purifier in your living space.

Placing your air purifier near the source of pollution is the best option. The source can be air coming from outside like windows or doors. And it can be inside such as mold-affected areas or cooking odor from the kitchen.

Let get into more detail about where you should place an air purifier to get the maximum performance.

1. Near to the Source

Are you able to identify where the source of the impurity is coming from? If so, that area is the perfect spot to put an air purifier.

You can easily visually detect impurities such as smoke wafting in your living space or mold growing in your bedroom. Thus, it is advised to keep your air purifier next to these pollution sources. The nearer the air purifier is to the impurity, the more air particles it can filter and trap at a faster rate. Hence, preventing them from spreading in your entire living space.

Even for odors, if your house is contaminated with strong, unpleasant, or toxic smells, your air purifier should be kept near to where the odor is originating from.

If the odor or pollutant is originating from an external source outside your home, such as second hand smoke,  place the air purifier next to where it is entering into your living space. For example, next to the bedroom door, window, or vent.

2. Shut All Windows and Doors

According to the EPA, the technology of HEPA filters with carbon layers, which are built-in in prime air purifiers, are capable of removing 99.7% of airborne particles, dust, and mold. Hence, when your air purifier is at work, you have to make sure that it is the only source of fresh air. Open windows and doors can lower your device’s effectiveness due to cross-contamination.

Through these open sources, you’re basically giving out a free invite to external dust particles and air pollutants to enter and contaminate your house. Hence, your air purifier’s hard work will be of no use.

3. The Higher the Airflow the Better

Air purifiers work the best when they are placed in an area that receives maximum airflow. Thus, placing it near windows, on walls, and next to your doorway can increase the efficiency of your air purifier.

The higher the airflow, the bigger the size would be of particles and air pollutants. Moreover, the airflow will enable the particles to travel faster as well. Thus, if an air purifier is not kept at these entrance points, the contaminants could travel and its particles would diffuse to the rest of the house.

In this way, your air purifier acts as a security guard for your bedroom, and near higher airflows is the best place to put an air purifier. By capturing the contaminants where they are the most congested, the air purifier filters them before they have a chance to spread out.

4. Place It Against the Wall

If you place the air purifier against the wall, this allows the device to suck in as much air as possible. Hence, resulting in a higher amount of purified air to be emitted.

However, the biggest mistake people make is placing the device against the flat surface of the wall. If you do so, it makes it extremely inefficient, only emitting 5% of the purified airflow. Hence, there has to be a certain distance maintained between the surface of the wall and the air purifier.

It should also be taken into account that every air purifier’s strength of air flow varies due to the square foot measurement of the room. Thus, to be on the safe side, the general rule of thumb is that the air purifier’s placement should be 15 cm from the wall. By doing so, you can achieve maximum optimization of your machine, regardless of its size and ability.

To ensure that your entire surrounding, from top to bottom, is being cleaned, elevating the device on a platform is an ideal spot for an air purifier.

You can easily place your air purifier on a piece of furniture such as a dresser, a side table, or a slab in your living space. However, bear in mind that the rule is that it should be anywhere between 2 feet to 5 feet high to filter airborne contaminants.

By elevating your air purifier, you are not only creating a cleansing balance in your room where all dimensions of your room are being purified,  but are also avoiding any tripping accidents caused by the air purifier.

However, creating extra room on your furniture for your electronic device can be a hassle. Hence, to avoid that you can instead invest in an air purifier that is equipped with a wall mount.

Also Read: Do Air Purifiers Help With Radon Gas? Things You Should Know

Places to Not Put Your Air Purifier

Showcase your air purifier as the masterpiece it is! Avoid sticking your poor machine in cramped corners and closed spaces. If you do so, it will not operate at maximum cleaning efficiency.

Corners and closed spaces are where air purifiers receive the lowest airflow as they will be blocked off from more than one corner. The only place that will be receiving any purified airflow will be that specific closed-off, cramped space. Thus, leaving your entire room contaminated with harmful particles.

Similarly, it is recommended to not place your air purifier behind or below furniture as these are also low air flow positions. By doing so, the air purifier will not be able to receive air from the entire room to filter it.

2. Maintain Distance from Other Small Electronics

In case you do notice any interference, it would be wise to change the position of your portable air purifier.

Humidity and an air purifier do not mix well together. The reason for this is because humidity causes a lot of strain on an air purifier. Since the moisture in the air causes the air to get heavier, it pushes the air purifier’s filters to exert more force to cleanse the air.

Therefore, it is suggested to place a dehumidifier in high humid areas instead. Nevertheless, contrary to common misconception, an air purifier and a dehumidifier can operate in the same room. However, if they are placed in the same space you should ensure that the dehumidifier is at its lowest setting.

The reason for this is so that the dehumidifier does not interfere with the air purifier. The air purifier cannot remove all the pollutant particles from the room if the air is being pushed and pulled from different directions.