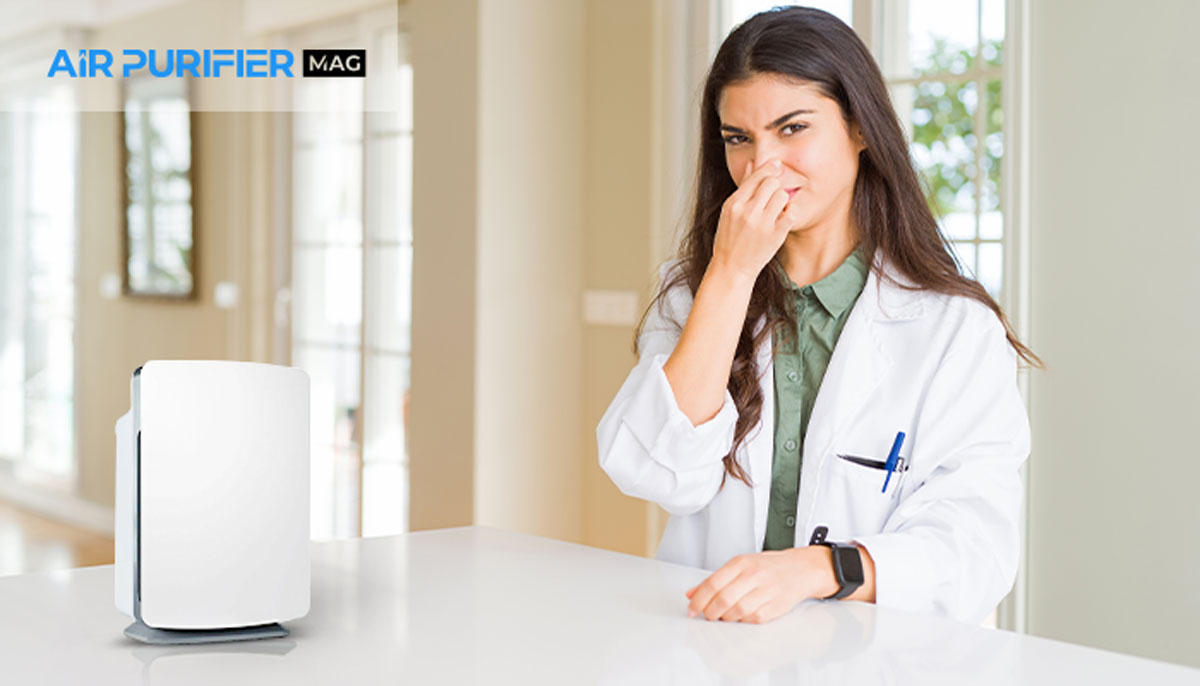 Air purifiers are meant to remove odors and other airborne irritants like mold, bacteria, dust, and pet dander. Having your air purifier give off odors like plastic or burning can be outright disturbing. You’re not alone, as air purifiers can smell like burning or plastic straight out of the box due to some reasons.

Burning odors or chlorine smell can be nauseating and must be diagnosed right away. While these odors are mostly caused by simple problems that are easy to fix, they can also be an indicator of faulty components that can lead to a fire. Moreover, if you have Hyperosmia, these odors can lead to severe anxiety and depression.

If you’re looking for the reason your air purifier smells like plastic or burning, you’re in the right place. Let’s look at the reasons that might be causing the different odors and what you can do to fix them.

In hurry… here are 3 top reasons:

Why Does My Air Purifier Smell Like Burning Or Plastic?

Plastic is made through a polymerization or polycondensation process that gives off odors, and plastics have a tendency to absorb the odors.

Air purifier housings are usually made out of plastics, and they can carry the odor from the manufacturing process. In other cases, a burning or plastic smell can be due to excessive heat being produced by the motor as it spins the fan to force air through a clogged filter.

In addition, activated carbon filters and pre-filters with a high carbon content are meant to trap odor molecules but can lead to a bad plastic smell because of their inherent problem of off-gassing. This is common and can often be the reason if your new air purifier smells like plastic.

Off-gassing refers to the release of harmful gases trapped in the housing of the air purifier during the manufacturing process, and carbon filters can trap that unpleasant smell, only to release it later. This is normal, and any such bad smell should subside within the first few weeks of usage.

Certain smells are linked to the humidity level, as a more humid environment can amplify the bad odor. While carbon filters are great for absorbing most odor-causing compounds, they may not always help.

If your air purifier smells like burning or plastic, and you’re uncertain of the reason, here’s what to check and what to do to fix the issue.

As mentioned earlier, a plastic smell may be because of the manufacturing process, and it might take a few uses before the odor subsides. This kind of smell usually comes back whenever the purifier is used after a period of rest because the odors become part of the plastic during the molding phase.

Some users report a strong plastic smell right after installing a replacement filter in the air purifier. These unwanted smells have the same source, i.e., the filter material absorbed some plastic odor during the manufacturing phase and might be giving off a foul odor that defeats the purpose of owning an air purifier.

A plastic smell can be a manufacturing flaw, but a persistent burning smell is usually an indicator of compromised air purification. This can be due to a smokey pollutant stuck in the pre-or True HEPA filter, or a burning smell from a UV-C air purifier can be an indication of a blown or malfunctioning UV-C light lamp.

UV light can help improve indoor air quality by killing off microbes, but these air cleaners also act as ozone generators, and some crudely manufactured ones can produce dangerous ozone levels.

Ozone carries a distinctive smell that can seem like ‘a burning wire’, and people often confuse it for the smell of chlorine. If the pungent smell is strong, it can be due to high concentration levels of ozone that are dangerous for health and require immediate remediation.

Different air cleaning technologies use different purification methods. An air purifier hooked up to your HVAC system is efficient against larger particles and can rid the air of allergens efficiently, but it requires regular cleaning to maintain its performance.

Skipping on duct cleaning and checking the filter every 2-4 weeks can lead to a situation where airborne particulates clog the filters, which can put undue stress on the fan motor. As the motor gives way, the air can have a mixture of plastic smells, burning smells, or even smoke smells.

What to Do About Air Purifier Smell?

Depending on the type of air purifier, you’ll need to either replace the UV-C bulb, keep the purifier running at maximum speed, or replace clogged filters to treat air purifier smell. Treating air purifier odors is not a difficult task and will usually take less than ten minutes.

Always start off by turning the power off and removing the power wires. This helps avert any untoward incident, particularly if the air cleaner has a metal body or metal collection plates in it.

For any kind of smell, always check for any clogged filters and vacuum the filter thoroughly if you can spot larger particulates blocking it. Doing this practice after every 1- 3 week period can help reduce the chances of any unwanted strange smell.

If you’re irritated by the plastic smell of a new air purifier, it is best to keep the purifier running at maximum speeds for a few days. This would allow the absorbed smell to be removed, and while you’ll have to put up with the elevated noise level, it can help remove the plastic smell effectively.

Odors can be an indication of a weakened air purifier, but if your air purifier smells like plastic, it can be a harmless manufacturing defect that will go away on its own in a few weeks. Maintaining clean air filters and replacing them on time can improve the quality of indoor air and extend the life of your air purifier.